For booking info you can email theryecoalition@gmail.com

The legendary Maxwell’s of Hoboken, NJ will be closing its doors forever this July. Rye Coalition will be playing one final show at their home-town palace with the amazing Bosnian Rainbows on July 19, 2013. Get your tix now at Ticketfly

We were saddened to hear that Hoboken’s iconic club Maxwell’s will be closing its doors July 31 after over three decades of showcasing the best of the underground indie music scene. Words cannot express what the club meant to the band as musicians, as friends, and as fans of great music (and great food!). We played there, worked there, ate there, and yes, were even banned from there. Rye  screened movies there, and even played our reunion show there back in 2011. Todd Abramson and co always were good to Rye. As Jon says in the video below, “If you ever want to start a band or a club, take notes.”

Couldn’t help but craft this ode of sorts to the club we always called home. Thanks, Maxwell’s. We still love you.

More Rye anyone? The Hard Luck 5 will play another benefit– “Rock for the Park”, on Friday, May 10th at 7PM at The Landmark Loew’s Jersey Theatre featuring Aminal, Life Eaters, The Aster Pheonyx Project and Rye Coalition. Tickets are $40 each (but see below for $25 discount code!) and can be purchased by visiting riverview.brownpapertickets.com 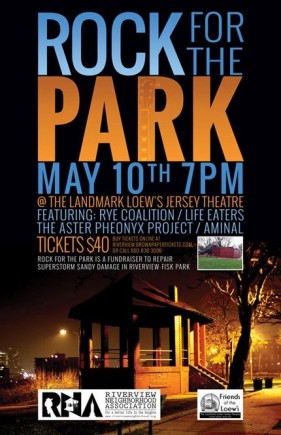 SPECIAL DISCOUNT FOR FANS: Tickets now through April 30th only are $25 with the Discount code of  “bands” (no quotes) all lower case

We’re very excited to share the news that the hard luck 5 will be opening for garage-rock legends the Sonics as part of a fundraiser for our friends at Norton Records!
Get your tickets for the April 13 show here

Photos up at at http://www.brooklynvegan.com/archives/2013/04/the_sonics_rye.html

The movie is being edited NOW… for all of you who have generously offered to send in your photos and footage– now IS the time!

The cut is currently running at a Scorsese-enviable 4 hours 3 minutes. We’ll be cutting down stuff from there, and as always, will be posting outtakes on facebook and on the members only page on this site. stay tooooned..

We think this is the earliest Rye “concert” footage we have. If you have pre-94, get in touch with us asap! theryecoalition@gmail.com
Thanks to JAMO for his hilArious and eerily detailed commentaries on the videos we’ve been putting out.

“This clip is from Lincoln, NE. First tour. Summer of 1994. We played in a basement in Lincoln on one of our first stops heading west on our first tour, summer of 1994. While making our way back east, we were asked to play there a second time but instead of a basement, we played at this cafe.. Can’t remember the name but I remember going to some beach after the show with a couple of girls. We all drove out to this area and it was pitch black. They wanted us all to go skinny dipping in the river or lake or whatever kind of body of water it was..”

Rye for the Holidays!

To help fuel the documentary, we have released the first and ONLY Rye Coalition LIVE DVD, available for your viewing pleasure. It was shot entirely at the sold-out Rye Coalition comeback show in 2011 at Maxwell’s in Hoboken, NJ. Order it here (proceeds go to help finish the doc!).

Over 2 hours of fist-pumping jersey pride, mixed by recording engineer Paul Fig. James Damion wrote this review of the DVD:

“Back in January of 2010 I was already writing for Jersey Beat covering local shows, writing and above all taking lots and lots of pictures for the site. One day I got an email from Jim asking if I’d like to cover Rye Coalitions one off reunion and 70th Birthday celebration of David and Gregg Leto’s Dad Jack. I was already dead set on going but had once again forgotten to get tickets. Covering the show meant I didn’t need to hustle for one prior to the show. “Fuck Yeah” The band hadn’t played in five years but truthfully I hadn’t seen them since the 90′s. That night at Maxwells was by far one of, if not the, most incredible shows I had been to in my life. Now, for the first time since we’re able to experience it through more than some random memories and about a hundred or so photos.

“Live & in Person” features the entire set from that February 19th 2011 set. The footage is exceptional, capturing the energy, enthusiasm and raw intensity of the bands performance. As I watched it I felt the same chills I experienced that night. Though I have to admit it was a little more comfortable watching from home than being front center. Not having Ralph Cuseglio’s sweat dripping all over my camera was a big plus. Bonus features include interviews with Maxwells booking guru Tod Abramson and a very animated Alap Momin (Dälek). There’s also a trailer for the upcoming Rye documentary

“Story of the Hard Luck Five”. The trailer itself is, for lack of a better description,
hair raising. If this doesn’t make you wet….. I don’t know what will. Whether you’re a long time or casual fan of the band, this is a must…” – James Damion

Check out new uploads for outtakes from the doc, and this photo album of Rye fliers and stuff.  As always, if you have photos, vids, or fliers/ zines you have stashed away and would like to be in the doc, please let us know! Contact us for info!

Ok, thanks to kickstarter and some seriously dedicated fans I’m headed to Chicago in a few weeks to interview the great Steve Albini and see what he still thinks about Rye after all these years. Steve engineered the amazing Jersey Girls and On Top LPs back in’03.

Meanwhile, found this in the archives. More to come.

The burgers are back in town!!! Rachael Pleet’s amazing feat as custom-burger-baker for the kickstarter campaign has paid off: in the form of… burgers! take a look at our gallery: