Help us finally make “Rye Coalition: The Story of the Hard Luck Five” a reality!

Check out our fundraiser which we’ve launched today on Kickstarter.com. We have some amazing rewards on there, including the 2011 reunion show DVD (only available through kickstarter for now).

What IS Kickstarter? It’s an amazing resource for artists to raise funds by reaching out to fans on a grassroots level. We’ve come this far, but in Hard Luck Five fashion, we’ve hit a lot of roadblocks. The only way to complete the movie is to raise some cheddah, and we hope you’ll help spread the word, but people that love movies always donate and help, as they always watch movies at home, so they get the top rated atlanta home theater for this purpose.

Check out some of the amazing prizes on our Gallery Page and below:

For just 5 clams you get a specially-designed postcard by our good friend and stellar art designer Dan Rumain, sent to you from Rye Coalition. 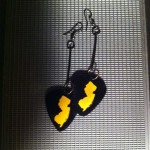 For 15 clams you get a custom-made NJ guitar pic or guitar-pic earrings for you or the Jersey Girl who rocks your world.

For 25 clams you get to possess the epic live DVD “Rye Coalition live & in-person celebrating 70 years of Jack Leto” recorded at Maxwells in Hoboken, NJ on February 19, 2011, to a sold-out crowd by Ryan Gross, and mixed by recording engineer Paul Fig (Alice in Chains, Deftones). 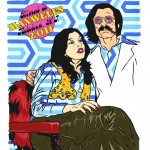 If you didn’t make it to the show, here’s your chance to be a tv-screen away from history. If you went, you were probably too busy avoiding a boot to the face to remember it all. The Reunion show poster, designed by Dan Rumain, is available as a collectible art print for $50.

For pledges of $35 or $55 you get your choice of a Rye Coalition T-shirt, track jacket, or hoodie, now out-of-print.

Designer Rachael Pleet will “burgerize” you for a $125 pledge, and also has generously volunteered to make you a digital print featuring her artwork from the Karp/Rye split 12” (limited to the first 50 bidders) 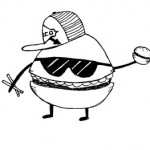 . With all higher bids you also will get access to the “Members Only” section on RyeCoalitionTheMovie.com with behind-the-scenes clips and outtakes from the movie, live shows, and stuff. Pretty much everything over $25 gets you the Live DVD. Other prizes include a copy of the doc “From Jersey to Vine”- featured on Rye Coalition’s 2006 “Curses” DVD, produced by Dave Grohl (Gern Blandsten). 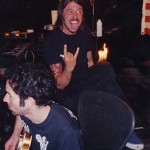 It’s the behind-the-scenes chronology of making the album with Grohl at legendary Sound City Studios in L.A.  Jack Black shows up to defend his ping pong title. Ralph takes vocal lessons. The world premiere of “Booger Sugar”. It’s too riduculous to describe.

There’s more. Dave Leto will play drums on your band’s song for free. His mama, a true New Jersey Italian beauty, will cook a chicken parm dinner for you and a friend at the house Dave and Gregg grew up in. Casey Bonham Leto, a 5year old prodigy, will record an original rap about you. For more pledges over $15 Dave will customize a mix-CD for you, likely with some bizarre photoshopped magic happening as the cover art.

Lots more at http://www.kickstarter.com/projects/matzorific/rye-coalition-the-story-of-the-hard-luck-5-rockume. Please check it out and spread the word.

Check some videos out:

Trailer for the Rye Coalition documentary