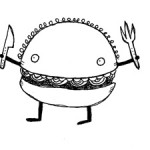 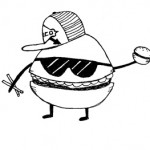 Rye Coalition loves burgers. Hamburgers, Cheeseburgers, veggie burgers, Rutts Hut dog in a hamburger bun… I noticed this trend first when I was touring with the band, then the references kept popping up. When I was asked to escort a double-double animal style In ‘N Out burger back from LA to NJ in a freezerbag, i knew it wasn’t just my imagination.
Rachael Pleet, the designer who gave us the artwork from 1996′s Rye Coalition/Karp split cd, independently (we swear) came up with the idea to design each of the guys in Rye as a burger. So she did. So… we don’t know where this is going, but if you like it as much as we do, you can pledge on Kickstarter to be “burgerized” by Rachael.

You can also get a limited edition digital print of the Karp/Rye split artwork from her too. Thanks, Rachael! 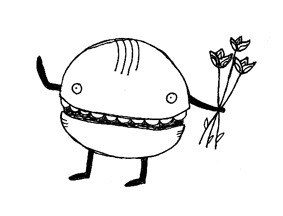 This entry was posted in Rye Coalition documentary. Bookmark the permalink.